Did this get forwarded to you? You can sign up as a paying subscriber and get full access to E&O by clicking here.

This is likely another sign that investments in real-world evidence are ramping up: In January, PRA Health Sciences, a CRO, quietly acquired remote patient monitoring company, Care Innovations for $165 million in cash plus $50 million in potential earnouts. The deal got a brief mention in PRA’s 10-K filing earlier this year.

PRA had been a customer of Care Innovations for the past few years, so it knew the company and its capabilities well.

While Care Innovations started out as an Intel-GE joint venture back in 2011 that was focused on aging in place technologies for most of its run, in recent years its book of business included more pharmaceutical companies and CROs, like PRA. GE sold its 50 percent stake to Intel at the beginning of 2016, and in 2017 venture capital firm iSeed acquired a majority stake from Intel in an auction. Roche Ventures invested in Care Innovations the following year as it eyed expansion opportunities for its digital diabetes management offering, MySugr.

In its prime and back when both Intel and GE still owned half the company, Care Innovations carried a valuation north of $300 million, based on Intel’s SEC filings.

The $215 million exit was a good one for iSeed and Roche. The acquisition followed a strong 2019, which led to interest from a handful of potential buyers. The addition of Care Innovations will bolster PRA’s RWE ambitions. Look for PRA to position itself against companies like Evidation Health in the coming year.

Livongo’s next investor call isn’t until early May, but the company announced this week that it has revised its Q1 revenue guidance to be a little higher — “in the range of $65.5 million to $66.5 million, versus prior guidance of $60.0 million to $62.0 million.” Livongo said it launched a record number of clients during the quarter — 620 — up from about 230 clients launched in Q1 2019.

During a Zoom call this week with WTF Health, Livongo Chairman Glen Tullman also revealed that Livongo has experienced a 10 percent “pop” in utilization since the coronavirus pandemic hit the country. Here’s what Tullman said:

“Yes, we did announce an increase in our guidance for the first quarter revenues for the company. What we have seen at Livongo is a significant increase in demand — about a 10 percent pop in utilization of our services. If you think about what we do, what we do is great preparation for something like this — a health crisis — because we are empowering people to stay healthy, stay at-home, and stay out of harm’s way. If you think about the populations that we work with, people with diabetes, people with hypertension, people with weight management issues or behavioral health issues, those populations are the most vulnerable. While they are not more likely to get coronavirus, if they do get it, it is much more serious. If you look at the data, the Centers for Disease Control recently said that 78 percent of the ICU admissions were people with a preexisting or chronic condition. Unfortunately, 90 percent of all the deaths in New York were people with chronic conditions… What do we want to
do? We want to keep those people at-home and away from the risks, away from doctors’ offices, clinics, ERs, and hospitals. And that’s what we do at Livongo.”

(Livongo isn’t the only digital health company that has noticed an uptick in utilization: Propeller Health announced earlier in the week: “Data from 7,578 Propeller users shows that patients are taking their preventative health more seriously than ever with the help of our digital health tool. Since the COVID-19 outbreak began to ramp up in January, patients have become 14.5 percent more adherent to their controller medication regimen, with most of that improvement noted in the last 4 weeks.”)

A few other highlights from Tullman’s WTF conversation:

Custom Kaiser deal: Tullman shared that its recent deal with Kaiser Permanente for Livongo’s myStrength behavioral health offering will not include support from Livongo’s coaches, because KP already has its own coaches on staff.

Deal with VA in the works? Tullman reminded listeners that Livongo’s CEO Zane Burke has a history with the VA. While Burke was CEO of Cerner, the EHR company inked a big deal with the VA. The implication: Livongo may be close to a deal with the VA? (As of today, there is no contract listed between any government agency and Livongo in the federal contract databases.)

Medicare RPM: Finally, Tullman said that Livongo was taking advantage of the federal government’s move to make it easier to use RPM codes to bill for providing remote telehealth services to Medicare patients. He also said he thinks a lot of the loosened regulations and new payment mechanisms will stick around once the pandemic passes.

UCSF conducted more than 25,000 video visits with patients in March, more than half its all-time total 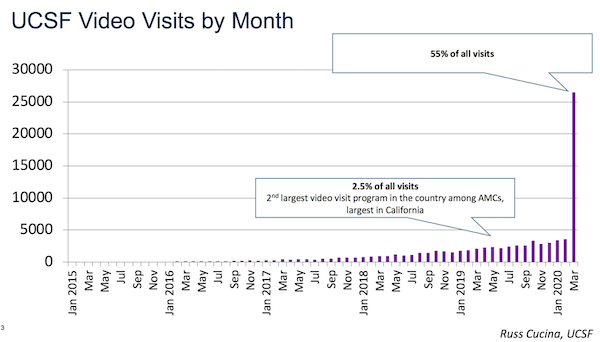