Did this get forwarded to you? You can sign up as a paying subscriber and get full access to E&O by clicking this –> You’re making the right decision here.

Even as they sign on more partners, pharmaceutical companies continue to pursue building their own digital therapeutics products in-house. The latest: Sanofi is looking to hire a Digital Therapeutic Venture Manager in Shanghai, China to develop and commercialize digital therapeutic products in that country. The pharmaco is positioning the initiative as an in-house startup.

“Irritable bowel syndrome is a complex disease. From patients, we know that a drug alone is usually not enough to get their symptoms under control. By cooperating with Cara Care, we offer our patients real added value in order to better master everyday life with irritable bowel syndrome,” Verena Bärnwick, Digital Health Innovation Lead at Sanofi Consumer Healthcare, said in a statement translated from German.

The first phase of the program will roll out in January. More here.

Propeller Health metrics and a look at its tech stack

Amazon Web Services hosted a big conference for developers this week in Las Vegas, which included a few sessions focused on the life sciences. Propeller Health CTO and co-founder Greg Tracy presented on how the company’s tech stack has evolved over the years — obviously, they make use of many of Amazon’s products these days. The 40-minute presentation is well worth a watch if you want a better sense of Propeller’s tech stack, and it includes a number of flowcharts like the one below, which compares its early vs. current configuration.

The preso also noted a handful of interesting metrics about Propeller Health that I hadn’t come across previously. Check those out below the image. 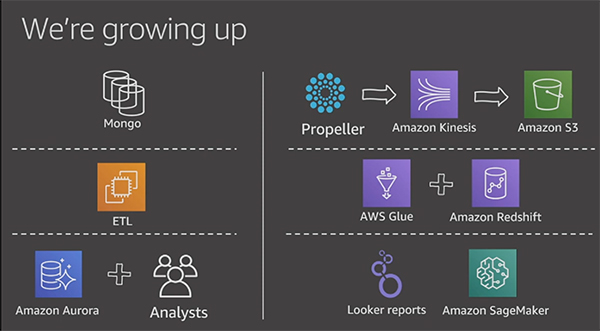 Intellectual Ventures, a well-known intellectual property holder founded by former Microsoft CTO Nathan Myhrvold, is building a digital therapeutics startup with an unnamed chief medical officer it describes “as one of the world-leading experts in nutritional biochemistry”. IV’s startup incubator, the ISF Incubator, is building what it called “an ambitious end-to-end (‘full-stack’) digital therapeutics startup” focused on “one of the most expensive chronic conditions.”

IV’s job posting doesn’t get into details beyond those few hints, but the combination of “nutritional biochemistry” and “most expensive” condition sounds like this might be a diabetes-focused startup. Of course, IV expects the company to move beyond the initial condition and build a platform for the treatment and management of multiple diseases. The repercussions of the Livongo IPO?

As covered in E&O’s The Pear Therapeutics Report, Intellectual Ventures is one of Pear’s key partners. Pear claims to have exclusive licenses in place for IV’s DTx patent portfolio, which does make this recent job posting here a bit of a head-scratcher.

Harvard Business School researchers teamed up with Elektra Labs to track the rising number of digital tools used in clinical trials, based on information entered into ClinicalTrials.gov. Below is a graph charting the topline findings from a presentation the researchers gave earlier this year and here’s a link to a recent write-up over at the HBS site. 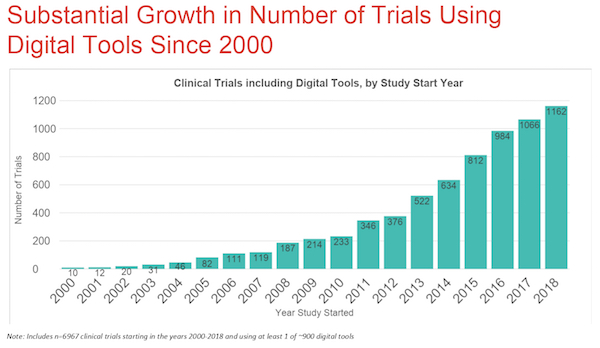