Free excerpt from The Noom Report: A 45 million moat

Welcome back to E&O Mondays, the free newsletter from Exits & Outcomes that features health tech puzzles and trivia, new and under-the-radar funding news, paid content teasers and other digital health odds and ends.

What follows is a lengthy excerpt from E&O’s recent 10,000-word deep dive into Noom. (Noom is a fast-growing, digital health company that started with a consumer weight loss program and is moving into a range of medical conditions. E&O put together this 10,000-word report, including strategy shifts and pivots, annual paid subscribers figures, revenue figures going back to 2015, increasing users-to-coach ratios, and much, much more.

Click here to sign up as a paying subscriber to read the whole report, or read on for the excerpt.) OK… without further ado… 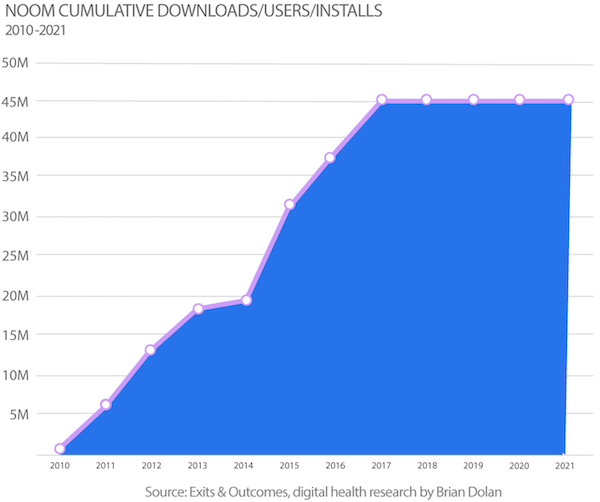 If you have read any news article about Noom in the past five years, it probably mentioned that Noom has more than 45 million users. That figure bothered me because I noticed it remained consistent from December 2016 up through the present. Once you read the rest of this report, you will understand that Noom has spent hundreds of millions of dollars on advertising in the last few years, which means that its cumulative number of users must have gone up *dramatically* since the end of 2016.

Why hasn’t the company shared an updated number?

I asked Noom for a current number and their official response was that they don’t disclose their “number of users” but that I could say “millions of users worldwide.” I believe that. As we’ll see below, Noom crossed into the “millions” — plural — of paying users in 2020. I have seen larger numbers than the oft-quoted 45 million in some news articles — both “more than 47 million” and “more than 50 million” have appeared in print. (In 2019, Noom used “50 million” in a press release too.) Noom told me that a recent article claiming Noom had more than 50 million users was inaccurate, even though it claimed to get the number from someone at Noom. A job ad from Noom posted in 2021 included the 45 million figure, so, while the company has an official position on how to talk to the press about this, that’s still the number other parts of the company use when they need one.

So, where did the 45 million figure come from?

As detailed in the Products section below, before Noom was Noom it was named WorkSmart Labs. The company originally developed fitness tracking and calorie counting apps that were among the most successful Android apps when that app store first launched. Noom eventually rolled most of the functionality of those apps into its weight loss app and finally sunsetted its original apps by 2015. Noom’s 45 million figure included those early downloads from the original WorkSmart Labs apps like CardioTrainer and Calorific.

Are they “users” or “downloads” or “installs”?

Over the years Noom has used different units when sharing their big number. In the early years, the company typically called them “downloads” but then switched to “installs” for most of 2015 when the figure was up to 32 million. Since 2016 Noom has almost always referred to “users” as the unit attached to the big number.

Installs vs downloads: There is an important difference between installs and downloads. (Read more about this in the Pre-loaded apps section below.) Unknown millions of Noom’s so-called user base never actually downloaded the company’s apps onto their smartphones. One of the company’s most important tactics in its early years was striking deals with smartphone device manufacturers and mobile operators around the world to pre-load CardioTrainer onto the Android devices they sold to users. That explains Noom’s tendency to call these “installs” in 2015. How many people with these pre-installed apps actually used CardioTrainer? That’s not a number that’s ever been shared. Considering all that, it’s a bit disingenuous that Noom occasionally makes statements like this one back in December 2016:

“Noom has changed the lives of over 45 million users.”

For what it’s worth, recently I went through Noom’s sign-up page and it provided me with a few more user metrics, but these were specifically referring to the number of people who used the program and successfully lost weight. However, the numbers seem mostly fictitious:

I stopped at that point.

Back to the big 45 million number: Noom’s official silence on its overall user base is likely to break if the company files for an IPO in the coming year, as is widely expected. I’m a bit curious to read how the company describes its historical numbers: users? installs? downloads? But I’m more curious to see how many people downloaded Noom’s app since 2016, which would provide a better understanding of the results of the company’s massive advertising spend in recent years. In any case, Noom’s 45 million user moat never really existed.

Alright… just to mix it up a bit: Time for a brand new Health Tech Trivia question (back with a Rebus puzzle next time). In keeping with the theme of today’s issue, this is going to be a Noom-related trivia question. It’s one of the more obscure details in Noom’s origin story… and, hey, no Googling!

Question: Prior to founding Noom, CEO and co-founder Saeju Jeong was working in NYC to bring which Broadway musical to Korea?

a.) The Phantom of the Opera

That’s about enough out of E&O Mondays Issue 043 I think.